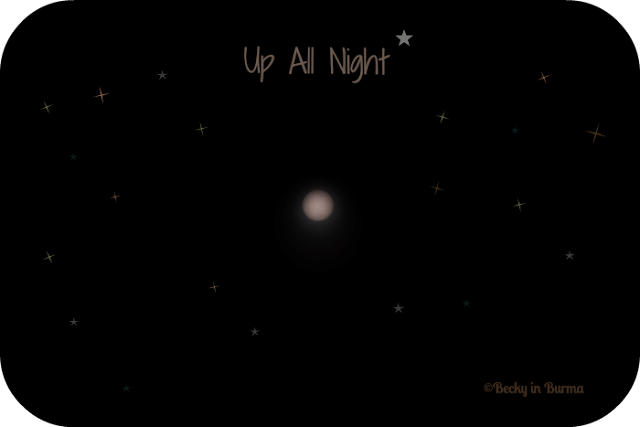 
Hope your week is going well so far. I can hardly believe we're already into the third week of January. I don't know about you, but it just doesn't seem possible!

In this post, I mentioned that I'm taking a writing e-course by author Laurie Wagner.  We're in week two of the course, which so far prompts students to slow down and pay attention to what's around us every day. Especially the simple, small things that we could easily discard. Writers are collectors of moments. We're meant to pay attention.

One of our homework assignments was to document an experience, in detail, that we had during the week. I thought I would share it with you. It gives you a bit of a glimpse into what late night/early is like at my house, with Myanmar-life mixed in.

* Up All Night *
That second latte at 6pm kept me buzzing well past 3am, but she had gone to bed hours ago.  It was cold enough I turned off the air conditioner, and the house was hushed.  Both rarely happen.

It also rarely happens that I’m completely alone in a room. No one interrupting.  No one needing me to: listen to their new plan; give them a cup of water or make them dinner; have a chat while I take a piss; or to find the pink blanket required for sleep.  Just silence.  Even the boisterous karaoke party at the nearby golf course had ended.

With a hot mug of tea sitting happily near my mouse, I wrote.

While writing, I occasionally heard a stray dog strain its croaky bark and another answer back with a yelp. Satisfied with their exchange, they’d go quiet.   I was so focused writing, documenting my very own plans for the year, the deep, low donging and murmured chanting from one of the Buddhist monasteries up the street barely registered.

“My god,” I thought. “It must be nearly morning.”  It still seemed black out.  I didn’t want to know what time it really was; my monitor was still bright, illuminated, taunting me to stick around a little bit longer, to write more.  How could I refuse, especially with the gift of stillness around me; but life is fluid, changing. Nothing stays the same.

Like a shadow emerging slowly from dawn, I felt something.  A presence.  Then, there she was: shuffling her bare little feet, hair wild, eyes crazed in half-sleep, clutching her worn, pink blanket.  “Mommm,” she whimpered, running to me, throwing her full six-year-old self onto my lap, arms wrapped tightly around my neck.  “I had a bad dream. A wreally, wreally, bad one.”

Her chest heaved and rattled as her shoulders shivered.  She buried her head in my neck while I rocked her on the computer chair. “Hussssshhhh, it’s OK,” I whispered.

She didn’t want to tell me what the bad dream was all about, but eventually, between gulps of air, gasped, “I lost you, mom. I lost you.”  She pressed her cheek against mine, slowly rubbing it like a cat.  I didn’t want to stop holding her.

I wanted to tell her she’d never lose me. That I’d always be there; but that’s a lie: one day (hopefully when I’m old and ready), she will lose me. Why I think morbid thoughts in the middle of tender vulnerability, I don’t know.

When was the last time you were up all night?

Posted by Becky Cavender at 9:49 AM