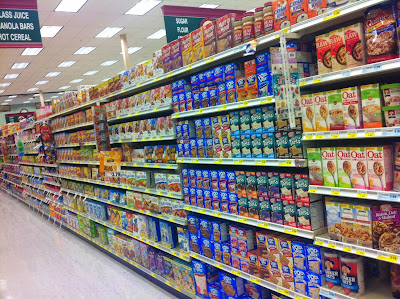 It was surreal. I wasn't firing on all cylinders. My mind felt hazy and heavy. Maybe on sensory overload.

The aisles were wider, longer, and taller than what I've been used to for the last 16 months. Though it was my local grocery store and I'd been there countless times over the years, it felt as foreign as the first time I walked into Yangon's CityMart.

American grocery stores are vast and filled with many options. We're kind of spoiled, really ... but that didn't occur to me until I walked down the enormous breakfast cereal aisle last week.

In Yangon, the cereal options were expanding, but you could still count on just a small 2' or 3' square space on the shelves to display availability. There were usually about four different choices or so - not much more than that.

At home, I was shocked to see the entire length of the aisle (at least twice as long as City Mart's aisles) filled with cereal from top shelf to bottom shelf. I could hardly move. My jaw might've dropped open a few inches as I stared.

I still can't get the image out of my head and it's been nearly a week.

Do people really eat that much cereal? Are the flavors all that different? Maybe there were several different box sizes?

Of course I've been down the cereal aisle in the US before, but you adapt to your surroundings: I adapted to limited options (options were treats!) in Myanmar. Often you didn't get options at all: Sometimes items were in stock and sometimes they weren't.

It felt indulgent to buy hummus and my daughter's favorite brand of honey Greek yogurt; but, the ice cream aisle with all the sizes and flavors and brands was almost too much to handle, so I only focused on the section that sold the smallest pots. I grabbed the tiny salted caramel gelato in hopes it would remind me of my recent trip to Italy (even though I didn't have salted caramel gelato in Italy), then got out of that section as fast as I could. My brain was already freezing enough as it was...

Reverse culture shock is as common as culture shock when you arrive to a new country. With each move back home after living overseas, I've experienced it.

Living abroad changes you. Living across the country (in your own country!) changes you. You begin to see things differently. Your values can change.

It's not fair for me to get judgy, though. Experience changes perspective. I suspect that after a year, I may give in to complaining about ordinary things that really aren't that important.

After all, I won't live on a road with several bamboo shacks and a garbage heap that the stray dogs eat from. I'll be free to say anything I want about politics or politicians without anyone blinking an eye (except to perhaps argue - but certainly without fear or uncertainty).  My house won't have rats or toads or centipedes or scorpions. I won't have to worry about it raining inside my house every time it rains outside. My concerns will be different. Not easier. Not better. Just different.

If you're repatriating here are a few articles you might want to check out:

Have you lived overseas before then repatriated? How did you handle reverse culture shock?

p.s. Thank you for your patience during my June holiday! And thanks for re-joining me here to hear about repatriation back in the US and my continued love for Myanmar.

To read about my journey in the United States as a writer (a single mom writer) and divorcing, then join me over on my professional writing site, Becky Cavender.

Email ThisBlogThis!Share to TwitterShare to FacebookShare to Pinterest
Labels: adjusting to us life, grocery shopping in the usa, repatriating
Location: Yakima, WA, USA